Survey of Health, Ageing and Retirement in Europe (SHARE ERIC) 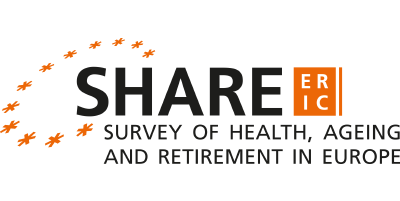 The Survey of Health, Ageing and Retirement in Europe (SHARE) is a multi-disciplinary and cross-national panel study of population ageing.

It studies the different ways in which people aged 50 and older live in Europe, collecting data about the health, socio-economic status and social and family networks of more than 110,000 individuals (approximately 220,000 interviews) from 20 European countries and Israel. Data are collected every two years, using a harmonised core questionnaire in all countries, as well as objective health measures such as hand grip strength and dried blood spots. The data are available to the entire research community free of charge.

SHARE responds to a Communication by the European Commission calling to “examine the possibility of establishing, in co-operation with Member States, a European Longitudinal Ageing Survey”. The project aims to help researchers understand the impact of population ageing on European societies and thus to help policy makers make decisions on health, social and economic policy. Many of the SHARE findings have strong policy implications with large economic and societal impacts. Some examples are published in the Annual Activity Report 2014 [PDF].

In March 2011 SHARE became the first European Research Infrastructure Consortium (ERIC). This gives it legal personality and capacity in all EU Member States and other partner countries of the ERIC. It also provides a firm governance structure and permits lean procurement procedures for subcontracts, two important advantages for running a large-scale survey such as SHARE.

SHARE ERIC was initially hosted by the Netherlands. Austria, Belgium, the Czech Republic, Germany and the Netherlands are the founding members of SHARE ERIC, with Switzerland having an observer status. Italy joined in 2011. Since 2013 also Greece, Israel, Poland, Slovenia, and Sweden have acceded.

In 2014 the seat of SHARE ERIC was transferred to Munich, where its central coordination is located at MEA (Munich Center for the Economics of Aging), Max-Planck-Institute for Social Law and Social Policy, Germany.

SHARE has one of the key roles in the SERISS project, putting in its experience with cross-national harmonisation of data and methodology and with the development of software technology for efficient fieldwork and database management. SHARE takes the lead in WP2: Representing the population and WP8: A coding module for socio-economic survey questions.

We use cookies to ensure that we give you the best experience on our website. If you continue to use this site we will assume that you are happy with this.OKMore about cookies